When I was a young student of Master Pearson’s (like ages 7-15) there used to be a whole group of us who got really into the competitive Taekwondo thing. Though this was far from Master Pearson’s interest he was happy to work with us, train us (pretty hard, mind you), and coach us through the various competitive circuits on the state and national level. I made some of my best friends throughout those years. We worked out together, trained hard together, shared in one another’s victories and commiserated with each other when we lost. We were a really tight team. One thing I remember very fondly was when Master Pearson surprised us in a hotel at some tournament with team t-shirts that he had made especially for us. These shirts were cool man! They had our logo on the front and the on back they had this mean looking face and a caption that read “Fear is only a state of mind…team IME (our school name) is not!”

This was not the first time nor was it the last that we would hear Master Pearson refer to something as a state of mind. We’d be shivering outside as Master Pearson led us on some insane hike through the woods at the winter retreat; “are you cold?” he would ask, “think about something warm, cold is only a state of mind.” We’d be sweltering, boiling hot on some wilderness survival weekend during the summer and he’d remind us that hot is only a state of mind as he quietly went about building a shelter or making a fire, never once did a bead of sweat roll down his face (thinking about ice cubes and penguins I’m sure!). Or we’d finish up a class, one where we burned our legs out completely, practicing kicks for the entire hour and he’d make us sit on our knees before we bowed out for what seemed like an eternity. “Pain is only a state of mind,” he’d say, as people squirmed in anguish.

This idea of fear and pain being states of mind is something that has come up frequently in Hagsaeng Naebu weekends. Our last meeting, working with the beast and the baby (see video posts for explanation) really put this concept to the test. These traditional training apparatuses actually caused a significant amount of pain. The beast in particular…I watched Master Pearson demonstrate it with ease and had no idea what I was in for. That demonstration fresh in my mind, I went all out as I executed my first spearhand strike against it. Man did that hurt! And then the cycle began. It was the fear from that pain that caused me to be more hesitant on the next strike, which affected my technique, which caused more pain, which in turn led to more fear. My hands were bruised for two or three days following the weekend (let’s remember I also chose to be the guinea pig and not follow each round with some well deserved herbal treatment for the hands) and I was not a happy camper. But it made me think a lot about the role of pain in traditional martial arts practice. 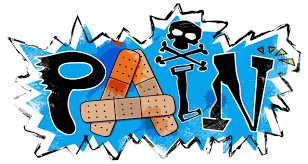 Why is it that people spent (and continue to spend) their training hours smashing their fists into tree trunks or being hit with shinais, or running up and down thousands of steps during grueling sessions with their instructors? I think people put themselves through this (and traditionally did so) in order to break this cycle of pain and fear, fear and pain. It makes sense; during a time when martial arts meant the difference between life and death and fighting was a normal part of daily existence, there was no room for fear of pain. If your training was painful then you would quickly overcome the fear that was associated with it. As we know, every experience is relative. Being in a real fight or confronting an enemy during war would seem like nothing compared to what your practice time was like. One would know that he could overcome this pain since he had already done it and probably worse while training.

This is an important lesson to learn. It makes me trust Master Pearson more and trust the process as well. There really is a reason behind what he asks us to do. It’s not because he’s mean or sadistic or likes to cause us pain, but rather that the pain he causes has a purpose. Each time we meet I’m hoping that my fear of these training apparatuses will decrease bit by bit and yeah, I suppose that might mean more pain, but perhaps that’s a small price to pay for progress…and after all isn’t it just a state of mind?