So what follows is my second post for this week (April 18th-24th).  You can see my previous post for an explanation on why you’re hearing from me twice this week…I don’t really feel like revisiting that little episode here.

(inserted comment post completion…please read all the way to the end.  This is a long post – I’m sorry – but I don’t get to my thoughts until the end)

Last week’s meeting was one of the best we’ve had.

We used new apparatuses that I wish I could tell you about, but we’re still waiting for some of you (hint hint readers!) to put in your guesses as to what you thought the plastic tubing was for (remember there’s a HUGE prize for the person who guesses right!).  We also finally got into some of the tactical, real-life applications and techniques.  We got down and dirty with a few different practical situations and we’ve got the bruises to prove it (although the ginger bath and some topical herbal treatments really did the trick – see Master Pearson’s week 6 post for more information).  We learned all about chain punching…a Wing Chun innovation that many other arts (like Kali) have borrowed and integrated into their own systems.  Basically you punch in close range, one hand after the other after the other, up a person’s body or into their face, creating a sort of windmill effect and a totally disorienting flurry of strikes — it’s very cool!  Oh and we didn’t have to run forms or do mental stuff so that was nice too – really all we did was beat each other up and beat up ourselves with the new apparatuses…great fun!

Instead of assigning books to read between now and our next meeting in May, Master Pearson changed things up and asked us to watch some DVDs instead.  Worden and Doll each took a Jet Li movie so they’ll get to learn more about Chinese martial arts and culture.  I was assigned Twilight Samurai, a Japanese film circa 2002, made by the acclaimed but somewhat quirky director Yoji Yamada.  The film, which is really shot quite beautifully,  got quite a bit of press and attention when it was released – even being nominated for a few Oscars in the foreign language category. 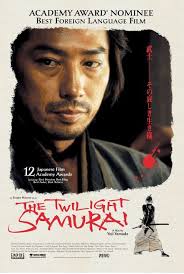 The movie follows the story of Seibei Iguchi, a low ranking samurai from a North Eastern Japanese province, but the narrative is told from the perspective of his five year-old daughter Ito, whom Iguchi adores along with her older sister and senile old mother.  Haunted by the illness and death of his wife, Iguchi does all he can to make ends meet, working as a bureaucrat in the province’s store rooms, under the mid 19th century Shogunate.  Japan is on the brink of the Meji Restoration  and the transition into modernity but even as the feudal system is collapsing around him, Iguchi clings tightly to the Samurai way of life and code of honor.  Lingering in the background and driving the plot hangs a love story.  Tomoe, the younger sister of Iguchi’s childhood friend returns to their village after having been divorced from her husband, a successful, high ranking samurai but also a violent drunkard whom Iguchi later confronts and defeats, revealing both to us, the audience, and to his clan leadership his expertise in the art of the short sword.

As the plot develops, Iguchi is “asked” by his superiors to use his skill to assassinate another high ranking samurai (who happens to be a drinking buddy of Tomoe’s ex husband).  Apparently the man, who has quite the reputation himself as a swordsman, refused to follow an order to commit seppeku (ritual suicide)  given by his clan’s leadership.  What ensues is a truly bizarre scene in which the two alternate between cutting each other to ribbons with their swords and having very deep philosophical conversations about love, marriage, and the end of the feudal era.   “Don’t be so impatient,” the man tells Iguchi, “you can kill me at any time.  I’d like to talk to you, have a seat.  It’s a nice day.”

There were two scenes that really caught my attention in this film and both dealt with the same subject…respect. We often think of the Japanese, with their emphasis on bowing and tradition and ceremony as the most respectful of the East Asian cultures.  This is arguably even more true when it comes to martial arts tradition.  The movie certainly corroborates this notion…continually showing the differences between ranks and classes of various people and the way in which they interact and treat one another.  Iguchi’s children, for instance, are shown repeatedly bowing low to their father and grandmother and all adults (except their servant), demonstrating accurately the filial piety that would have been expected of them at that time.

There were other scenes too in which this emphasis on respect was displayed but with some nuances that made them interesting to me.  In one part, the director is trying to describe how bad Iguchi’s financial situation has become.  He shows up to work un-bathed and with a torn kimono.  Unfortunately for him this happens to be the day of the clan leader’s visit to the storehouse.  The leader was horrified by his appearance and word spreads quickly of Iguchi’s audacity.  In the end, it is his uncle who makes amends on his behalf.  He later goes to visit Iguchi to chew him out.  Iguchi receives his uncle into his home in the same respectful manner that we have come to expect by this point in the film.  He deeply and genuinely expresses his gratitude for his uncle’s intervention with the clan leader.  But when the discussion turns to a more personal nature, that Iguchi should find a new wife and such behavior would no longer be a problem, the latter’s respectful attitude becomes somewhat modified.

In a later scene, Iguchi is summoned to his own local governor’s home – you can imagine the displays of respect that took place here.  He is given the decree that he is to go and kill the man who has brazenly refused to commit seppeku.  Interestingly, Iguchi, not unlike the man he eventually assassinates, likewise tries to to refuse this direct order.  Again, his attitude of blind deference, the one we so often  associate with this part of the world, changes slightly.  However, what is intriguing in both of these scenes is that Iguchi never ceases to be polite, filial, or respectful despite his disagreement with his uncle or his hesitancy to fulfill the command of his superior.

To me, this is interesting to think about from the perspective of the modern martial artist.  I believe, though I am certainly not always good at demonstrating it, that the way we interact with our instructors and training partners ought to resemble that of the characters of this film – especially in its complexity and nuance.  I was happy and relieved to see that the cultural norms presented by Twilight Samurai were not that of blind and unthinking obedience, as is often the case in Samurai films.  So often in martial arts schools, respect is won by instilling fear…by military style instructors who demand to be answered “yes sir,” or “yes ma’am” and wander around the class menacingly, pointing and shouting instructions instead of teaching.  The students appear respectful to an outsider. They bow on command because a master has walked into the room or because that is simply the predictable routine (I mean how many times must one end 22 basic motions with the words cha’ryut kyoungyet, go get a drink before it just becomes part of muscle memory!!??) In my mind, however, this is not genuine respect and it does not come from a place of true feeling or proper mindset.  This is simply a conditioned response, built up over time and often at the hand of an instructor who is so lacking in his or her own self esteem that he or she feels the need to bully the students in order to receive this false respect that he or she feels he or she deserves.

While routine and conditioned responses are not necessarily a bad thing generally (particularly in the martial arts) it is not the way, in my opinion to demonstrate respect for one’s teachers.  Never once, at least to my memory, has my instructor insisted that I call him sir or punished me for not having done so.  In fact, Master Pearson has often made comments to contrary (doubt me? Ask him the next time you see him what he thinks we should call him in a room of mixed company…I’m sure you’ll love his answer!).   And yet, the majority of his students, myself included, refer to him generally by this title of respect.  Not because he has told us to and not because we get in trouble if we don’t; only because, independently, we have each decided for and by ourselves that this is the way he deserves to be addressed.  The way a student interacts with his teacher, Master Pearson often reminds us, reflects the teacher not the student.  Or in the words of Mister Miyagi (oh yeah, I’m totally pulling that out!) “there is no such thing as a bad student, only bad teachers.” Model genuine respect and you’ll receive genuine respect.  Model a false sense of respect, a two-faced, dishonest respect (i.e. offer someone words of congratulations on their promotion and then question the rank they possess and the person who convened it upon them) and that’s the kind of respect you’ll receive in turn.

Iguchi’s character in the film makes a further statement regarding what constitutes genuine respect.  He teaches us that true respect does not imply unwavering, blind obedience.  He himself  doubts, questions, hesitates, responds, “talks back,” to his superiors and yet does so continuously within the framework of what should be considered respectful conduct.  The lesson is an important one for us as modern martial artists.  I think one of the signs that you have a great instructor, and that your relationship with him or her is healthy and productive, is whether or not your training feels like a dialogue, or at least develops into this.  If  you feel like you’re always being talked at instead of with, if you feel you’re being made to do things that are painful or uncomfortable without a larger benefit being revealed to you, if you feel afraid to ask questions or politely and discreetly disagree with a particular instruction or concept, then get out now! (and come to our school…haha just kidding…sort of!).  Seriously, this is not a healthy environment in which to be training and you will simply stunt your development as a martial artist.  A good teacher encourages his or her students at a certain point to start thinking for themselves; to develop their martial arts intelligence.   The only way to do this is be open and secure enough to allow a student to directly question you and to help them to do so in a respectful way.  There is an appropriate, genuinely respectful way to disagree, Iguchi proves that to us.  It is not always easy to do (In fact at our last meeting, I totally messed this up when it came to a particular red, pickled fruit!!), and it is something that I think my fellow Hagsaeng Naebu and I or any dedicated martial artist struggles with quite a bit, but it can and it should be done.

This was quite the rambling blog post!  Sorry for the stream of consciousness and thank you everyone for reading to the end.  Check out the film too if you have a chance.  It is a beautiful glimpse into the feudal culture of Japan and is strikingly different to the typical samurai film.  It also contains many lessons for modern martial arts and life in general.  I’d love to hear what you draw from it!