This week I’ve finished reading my book, A Path To Liberation by Herman Kauz. In his last chapters he discusses his current approach to teaching martial arts, resulting from his training and prior teaching experience; then lastly there is the Summary. First I will share the quote that opens the “Summary” chapter.

“What I know of the divine sciences and Holy Scripture, I learnt in woods and fields. I have had no other masters than the beeches and the oaks.”

This past week, as I often am I have been reminded of the splendor of the natural world. The black raspberries outside my house are ripe and have been serving me breakfast and desert. I love to look up at a tree, especially when there is a breeze and the leaves are all moving in different ways. The above quote is interesting in that it comes from a perhaps unusual seeming source for such a quote, a Saint. 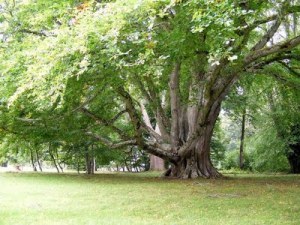 Herman Kauz states; “Although I was a teacher of both judo and karate for a few decades, my main emphasis in the last twenty years has been on tai chi chuan. Through tai chi training, I believe students can derive perhaps 90 percent of the benefits martial arts can confer, with far fewer injuries. I teach Cheng Man-ching’s tai chi form and a rather tame, by fighting standards, push-hands in which foot positions are fixed and opponents use the very minimum of strength to off-balance or uproot one another. Unfortunately, for students who might think that push-hands alone will confer self-defense ability, I know that someone who has no wider experience of sparring or fighting will have a difficult time of it in a real fight. Therefore… I introduced this kind of training, thinking that students should have the ability and the option to be able to defend themselves from attack. Nor was this the only or even the most important reason for the inclusion of self-defense… The class is limited to those who have completed at least a year of push-hands and it concentrates on karate…”

Over the years as I have been a martial art student, I sometimes end up talking to people outside the martial arts world about my study of martial arts (family, friends etc.). Because I enjoy what we do and what I learn I sometimes have found myself excitedly describing some new technique for taking a person down, knocking them out etc., only to realize that my audience is not as excited about this as I was. “Why would you want to do that?” Is a question I never anticipated but have heard often by now and I’ve accepted that not everyone is excited about learning a new self-defense technique or being thrown on the ground in a new and different way. Of course within the martial arts classes fellow students tend to be excited about the same kinds of things. As I get older even I am sometimes less enthusiastic about being thrown on the ground than I was as a teenager (though am finding that when I am in better shape it hurts less).  So I find it interesting that Mr. Kauz teaches classes in tai chi partly to give students the option to benefit from martial arts without getting hurt. It does seem that more people may be interested in taking such a class. Then he also offers the option of some self-defense training, once a student has completed the first year of tai chi study.

Push-hands is an exercise that I have been introduced to by Master Pearson, where two people face each other with their hands open and together. Without using excess force the idea is to try to make the other person step. This can be done in various stances.

Push hands, referred to as “Tai Chi Sparring” and I just learned there are push-hands tournaments (Shaolincom.com).

Next the book discusses the concept of chi, energy in our bodies. “Tai chi theory has it that we must generate in all our movements an internal or intrinsic energy, which we can utilize to hurt or heal.” Interestingly, he states “There is no doubt in my mind that such energy exists in all of us. Unfortunately, in tai chi we speak of chi in almost mystical terms, leading to a certain vagueness or confusion as students wonder what it is they feel or should feel… to produce a desired effect on something, we try to coordinate as efficiently as possible all the parts of our system necessary to our action. Whatever terms we use to describe the nonphysical aspects of our functioning also come into play in any of our actions. We can strengthen these nonphysical aspects by becoming more aware of them and of the part they play in our techniques. But martial artists who do not entertain these concepts and simply apply themselves wholeheartedly and singlemindedly to their endeavors are capable of the same focus of energy and generation of power as are those who speak constantly of chi.”

Interestingly he notes that though students “may start out in a system labeled hard or soft, … as the years go by and their skill increases, they become accomplished in almost all the possible ways of attacking and defending. Their knowledge and experience then make what they do difficult to categorize as hard or soft, external or internal. Depending on their assessment of a situation, they may choose to do one of the following: evade an attack, smother it once it begins, stop it before it really gains momentum and power, or parry it with a hard block. Usually, they will perform any of these techniques with equal facility. Generally, they will be relaxed until the instant they focus their power onto the target.”

On life philosophy: “We all have a philosophy of life, a set of beliefs about how things work. Often these ideas have little to do with logic or reason, or they may have been useful in our childhood but not as useful when we matured. They may be the product of the effect of a powerful experience on us or of a basic nature that is strongly predisposed in a particular direction.

For example, let us suppose taht we believe we must compete with and defeat others to get our share of the world’s goods. As a consequence, we are likely to try to prepare our minds and bodies and to arrange our lives to enable us to deal successfully with anyone who wants what we want or who attempts to take what we have. If we think this way we can easily support our view by evidence we see all around us that everyone is out for himself with little regard for most others. We will not notice or accept evidence that might support a contrary position.

Yet, we could just as easily put forward an opposing point of view and find the necessary evidence for it in our own experience. This position would have it that life is essentially cooperative and that everything fits together to give us the world or universe we are a part of…. Some people have come to still another viewpoint concerning the most satisfying or least difficult way to live. They think it makes sense to become less ambitious, to give up trying to get something…. The Taoists, for their part, would have us tamper as little as possible with the workings of the world. They advocate discovering the rhythm of life and then attempting to harmonize with it. In an oversimplified example of this viewpoint, it is natural to plant in the spring and to harvest in the fall…

I believe, however, that all theories of reality are flawed, because of the overwhelmingly great number of variables involved, capable of seemingly infinite interpretation, and perhaps more important, because of the mystery that ultimately underlies existence. Moreover, in my experience, embracing or relying on a particular theory is seldom enough to insulate us, if that is our intention, from the immediacy of physical, mental, or emotional suffering. It seems impossible for us to live in a way that will completely avoid physical and mental abrasions. Perhaps some degree of suffering is a consequence of being alive, and perhaps even full understanding of how the world works (if it were possible) is not proof against feeling pain.”

In closing- “Yet, although different ways of dealing with a particular problem are possible and although we may intentionally choose a course of action that leads to calamity, it is probably useful for us to remain awake. This attitude of mind entails trying to pay attention to what we think and do throughout the day. It should extend even to learning about and becoming conscious of our dream life. It rests on the premise that we are affected by everything we do and that each of our actions affects others and, for that matter, everything in the universe. To pay attention, we need a strong, flexible, and open mind. The mind here is not thought of in just its logical, analytical functioning but also in its intuitive role. All these qualities of mind can be developed and enhanced through training.”

Herman Kauz is the author of this as well as other books about martial arts, tai chi, and push hands.

The Martial Spirit by Herman Kauz