Back in the early 80’s I took judo at a school in Penfield, New York. It was called Bushidokai (it’s still there but with a different instructor) and was run by Sensei Jamie Livergood. I took classes on and off with him for over 4 years (more off than on, sad to say) and it had a huge impact on my life. It wasn’t the throws that Sensei taught me but his actions and everything he said during classes that did. Most of my senior black belts have heard numerous stories about Grandmaster Ahn, Grandmaster Gallano and Shibata Sensei, but few have heard about Sensei Livergood. The fact that I haven’t shared stories about him isn’t due to a lack of a profound sense of gratitude for everything he taught me but because, other than Master Van Hee, none of my students have ever met him. So this post will be my way of sharing some stories with all of you. 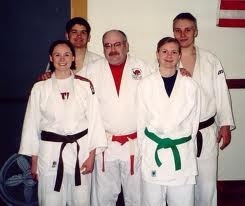 To start off with, I think it is important to realize I was in my late teens when I started taking classes with Sensei Livergood and I was trying to find my place in the world. Back then, I loved everything from every Asian country. It was almost as if I grouped Japan, China and Korea together as one place. I had no idea of how drastically different the three countries were. All I knew is that I wanted more and as long as it was from Asia I didn’t care what it was.

My Taekwondo instructor at that time never talked or taught anything other than the physical aspects of Taekwondo. Whenever I would ask him questions about anything beyond that, he would simply shrug as if saying, “I just teach Taekwondo. Can’t help you with that.” Sensei, on the other hand, would answer my questions. Sometimes not immediately with words, but maybe by handing me a book to read in a future class or teaching a future class that would answer my questions.

So how exactly did he change my life? I’ll tell you. Back then, I was very interested in meditation and if you ever read this blog or have taken a class from me you know I still am. The problem is that whenever I ask anyone in Taekwondo to teach me about how to meditate (it was a very mysterious topic to me back then and I love mysterious things), I was met with everything from, believe it or not, “meditation is satanic” to completely blank looks. Sensei was the only person that actually took any interest in answering my question. The class after I asked him about it, he handed me a book, “The Three Pillars of Zen” by Philip Kapleau Roshi, and taught an entire class on Active and Passive Progressive Relaxation and Visual Imagery. I was blown away by the class. After the class was over I knew I wanted more. I immediately started reading the Three Pillars. I hung on every word and it was one of the single most pivotal points in my life. I had no idea that Roshi Kapleau actually lived in my city until I finished the book. There was one very small and insignificant line at the end of the book that mentioned the name of the Zen Center Roshi had founded. It was the Rochester Zen Center. I thought, “There is no way it could be my Rochester”, but I opened up the phone book and looked anyway. Sure enough it was and I immediately called and signed up for the Introductory Workshop that they offered. I have been actively practicing meditation ever since then and it has had a profound influence on everything I teach. In addition, as most of you that regularly read this blog know, I’m putting the finishing touches on my Dō Meditation book that should be published this year. So for all of you that quietly curse me, when you are gazing at a wall at 4am, in the middle of the winter (the annual winter retreat), you can now direct your anger at the correct person.

Sensei, in addition to teaching Judo, owned an herbal shop. Before I had met him, I had already developed an interest in herbal medicine but I wasn’t really able to tryout anything I was reading about, due to a lack of the actual herbs. Sensei’s store changed all that. He had every herb I wanted and they were all very high quality. His store allowed me to make all sorts of tinctures, ointments and pills. I truly believe that if his store had not come into my life, I would never have continued to learn about herbal medicine because I would have lost interest without the hands on experience. One day, after a Judo class, I bought a large bag filled with chickweed from him. I was going to make an ointment for sore muscles out of it. I put the bag inside my martial art bag and then went to Taekwondo. At that point in my life, I frequently took two or three martial art classes a day. My Taekwondo class that day was held on a basketball court at a local college. I changed into my Taekwondo uniform and put my bag down on the side wall. About 30 minutes into class, we were all broken up into small groups to practice self-defense. Durning that practice, my instructor came over to me and with a very upset look on his face, ordered me to follow him. He walked over to my bag (and the other students’ bags) and said, “Sit!”. He then proceeded to lecture me on how drugs can destroy lives. At the end of the lecture, he told me how disappointed he was in me and proceeded, in a dramatic manner, to pull the bag of chickweed out of my bag and throw it at me. He thought it was a bag of Pot. I didn’t know what to say. He was my instructor and I was in a position were I had to do the unthinkable and tell him he was wrong. I simply said, “Sir, it’s chickweed. I make ointments out of it for sore muscles”. He simply said, “Oh” and walked away.

One day during class, I was thrown and landed right on the top of my head. It hurt. No, it really hurt. Afterwards I could only move my head maybe 2 inches in either direction. All I could do was envision wearing a huge neck brace for months and not being able to take classes. Sensei told me to sit on the ground and he sat behind me. He grabbed my head with his hands and slowly started moving it back and forth. Then with a sharp motion, he turned my head one direction. The sound my neck made when it “cracked” was unbelievable. Then he did the same thing the other direction with the same results. Then he said, “now get back out on the mat”. That was my first experience with a chiropractic adjustment. Up until that point I had never considered going to a chiropractor. Not only do I go to one on a monthly basis now, due to that experience, my chiropractor is one of my best friends. So I got a friend and got much much healthier.

Years after Sensei moved to Ohio I decided to look him up on the Internet and I found that he had a book on Amazon. I immediately purchased a copy. The book was very good, but it wasn’t the quality of the book that changed me, it was the fact that the book existed. It showed me that it was possible for a martial art instructor to get a book published and sold on Amazon. It encouraged me to push myself into getting one of my books published and as most of you know I now have several martial art books and a statistics text-book available in both North America and Europe.

I think that is enough. I could go on and on but if I did the post would be to long and no one would read it in its entirety. So, in conclusion:

Something to think about….