Since the formation of the World Taekwondo Federation, its officers and member countries have tried to standardize the practice of Forms in Taekwondo.  To accomplish this, they developed a set of forms called the Taegeuk Poomse.  When these forms were being created, all of their movements, techniques, appearances and projected meanings were based on the Eight Trigrams, with each one of the Taegeuks representing a different Trigram.  A general misconception, however, is that only the physical portion of the Taegeuk Poomse needs to be mastered.  In order to practice the Taegeuk forms properly, conveying their intended meaning to one’s self and to observers, it is necessary to combine both the physical and mental aspects of the Taegeuk forms.  At the point when this is accomplished, the forms will take on an entirely different appearance, atmosphere and ambiance.

Taegeuk One (태극1장) – “Heaven” is the beginning of all Taegeuk Forms that follow.  It is the father of all and the initial molding force that guides future actions and outcomes in these forms. It is pure Yang and therefore is representative of Heaven and light.  As such, it should be performed with the grandeur that is due Heaven and with the caution that any mistake made here will change the course of future events for the worse.

Taegeuk Two (태극2장) – “Lake” is representative of a Lake: serene, placid and halcyon.  In its depths lie untold treasures, and mysteries of the life it supports.  The movements of this form should be done with fluidity and the realization that even though there are boundaries that control our actions, we have the ability to overcome them.  This knowledge, however, should not cause the exaggeration of amour-propre, but increase the joy that is felt when one is in control of one’s destiny.

Taegeuk Three (태극3장) – “Fire” flashes with the energy of the Trigram it represents: Fire.  For centuries, Fire has been a means of survival and without it, the melioration of mankind would have come to an end.  Ironically, Fire has also simultaneously been the means of catastrophe.  Like Fire, the techniques of this form should be done in an almost rhythmic fashion with occasional outbursts of energy.

Taegeuk Four (태극4장) – “Thunder” is energy in one of its more beautiful states.  Thunder emanates from the Heavens and reaches down to the Earth in a fury that is hardly ever matched by any force created by nature.  It circles, revolves and gyrates through and around the zephyr.  It is in this mind state that Taegeuk Four should be performed.

Taegeuk Five (태극5장) – “Wind” being predominantly Yang, tends to be benevolent in nature.  Gently blowing the trees, grasses and inhabitants of the Earth, it is mentally and physically uplifting.  However, in its rage, Wind has the power to destroy villages, cities and in extreme cases, even entire states.  Taegeuk Five Poomse should be performed in this light, with flowing elegance, while containing the ability to cause mass destruction with a single movement.

Taegeuk Six (태극6장) – “Water” is representative of Water.  Like Water, it is at once a genesis and decimation.  Seemingly supple and conforming, it has the ability to move a mountain.  The movements of Taegeuk Six are performed in accordance with the nature of Water: occasionally standing still as a lake, moving fast as a racing river, or exploding outward as a crashing wave.

Taegeuk Seven (태극7장) – “Mountain” being predominantly Um, closely resembles the mental essence of Taegeuk Eight.  Mountains can range in size from a small hill, located in Central America, to the tallest apex on the planet Earth, located in the Himalayas.  Regardless of their physical dimensions, all Mountains share the same grandeur and majesty.  Therefore, this Poomse should be executed with the feeling that your movements deserve highest praise and esteem.  Caution should again, as in Taegeuk One, be taken that one’s ego is not exaggerated.

Taegeuk Eight (태극8장) – “Earth” is pure Um: the end of the beginning, the dark side of a mountain, the evil element of all that is good.  However, nothing can exist as pure Um or Yang.  Therefore, even in a state of complete darkness, there is still light to be found right around the corner.  If a man starts walking around a circle, eventually he will come to a point where one more step will take him back to the same spot at which he started his journey.  The practitioner of Taegeuk Eight should keep this in mind; even though Taegeuk Eight is the last form learned, it is also the first, second, third…  The mental and physical portrayal of this form should be as such.

The Taegeuk Poomse are taught to Taekwondo students in accordance with their rank and ability.  Therefore, at any one given point in a student’s training, he or she may not know the entire collection of forms.  However, there will be a point at which the entire group has been learned.  At this juncture, the forms can be practiced as a set to convey their meaning as a totality.

The main problem that arises in the practice of the Taegeuk Poomse is that most individuals never practice all the forms together, but select only one or two forms at random to work on.  Another problem that arises is that most people who do practice all the Taegeuk forms in one session take a break after they perform only two or three forms.  In order to convey the true meaning of these forms as a whole, all the forms need to be performed as one continuous pattern, with no breaks or ready motions in between each pattern.

It should be noted that the majority of Taoist texts written in their original form do not have to be read in any specific order.  The chapters of these books can be read in any order and the reader will have the same understanding of the work as if it were read from front to back.  In some cases, the understanding of the work will be greater if the text is not read in order.  This concept also applies to the Taegeuk Poomse.  The forms do not have to be done in ascending order; they can be done in random, descending or prearranged order.  Regardless of the order in which these forms are practiced, as long as all the forms are performed and none of them are repeated, the same overall meaning will be conveyed.  However, with respect to the trigrams, the forms do have an order of importance.

The following chart illustrates this ordering:

The following diagram provides a means of practicing the Taegeuk Poomse in accordance with the theory of the order of importance, with respect to the Trigrams: 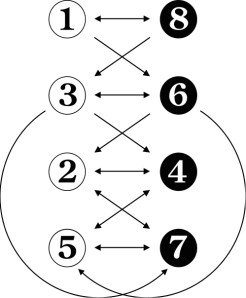 Note: Start at either Taegeuk 1 or 8.  Progress through the graph by alternating from black to white circles.  Do every form once and only once.  Only go in the direction the arrows point.

The necessity of practicing the Taegeuk Poomse from both the physical and mental standpoint cannot be overly stressed.  If these forms are practiced only as a series of physical movements, they are not complete.  An analogy would be that of a golfer with a club but no ball.  If only the mental aspect of the forms were to be taught for the benefit of teaching students part of the philosophical dimension of Taekwondo, then this would represent a step forward for most schools.  The greatest advantage is achieved only when the mental aspect of the Taegeuk Poomse is fully integrated into the forms.

Something to think about….